After my total knee replacement, I took this photo from my hospital bed at 4am the morning after surgery.  I had been wide awake all night and the dawn was symbolic. It felt like a new beginning in my life

-would then continue the process with the appropriate support at home.

-would get dressed each day

-would regain independence gradually until ready for discharge 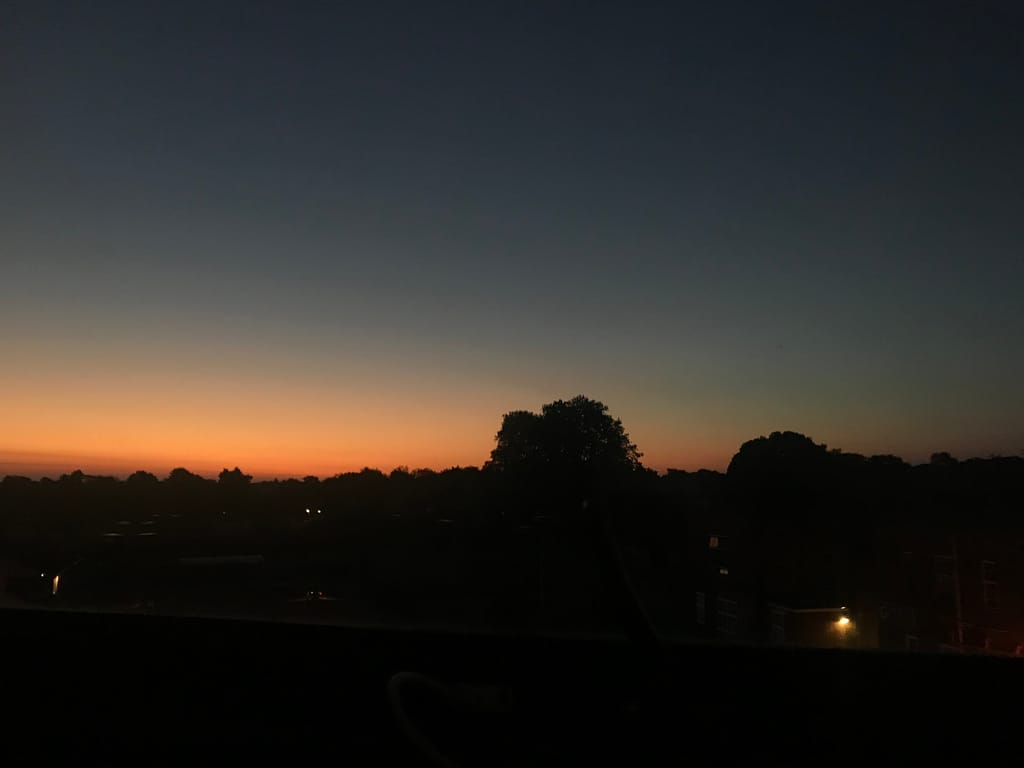 The average length of stay at the hospital is reported to be two days for a total knee replacement.  In the end, I was in hospital for three nights.

My prime objective was to become well enough to be discharged safely  to go home as soon as possible because -:

-there’s evidence of quicker and more efficient recovery in most cases.

-to be medically fit

-to have the pain from the surgery well controlled

This is a brief diary of how that happened

-had a bandage round my leg with a drain from the wound.

-was shown how to do exercises in bed

-was shown how to use a special holster with ice gel packs on either side to ice my knee.

-was helped into a chair with arms by the bed and tried to bend my knee.

-In the afternoon, the physiotherapist taught me how to use a walker.

-The  bandage was taken off and I could see the plaster over the wound which had  self dissolving stitches underneath.

-I had  an X-ray of my knee. The mark on the dressing is where the radiographer lined up the machine

-I had a setback as I nearly fainted when I sat in the chair by the bed.  (This is quite common after a major operation and it meant that my length of stay was extended by a day.)

-In the morning, the physiotherapist assistant taught me to go up and down a fake step with crutches

-In the afternoon, she taught me how to go up and down stairs with crutches.

The physiotherapist checked that I was competent going up and down the stairs.

I was given the approval to go home

I had a shower and washed my hair in the ward shower room which made me feel a lot better. I had to wait for the paperwork, discharge summary and prescription before I could finally go home at 3.20pm.

-This was discussed with every patient at the Pre-Assessment appointment and again at the Preparing for Surgery afternoon.